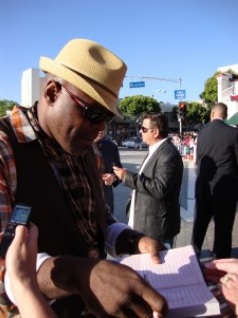 The 2014 Los Angeles Film Festival (LAFF) is on! Before I head to Los Angeles, here is a retro Diagnosis Movies column from the 2009 LAFF as published on page 9 in the August 21, 2009 Town Times:

Michal Bentt might seem to be a giant with his hulking girth and former WBO Heavyweight Boxing Championship status, but don’t be fooled.  He plays Herbert Youngblood, a murderer who helps Dillinger escape from prison in Michael Mann’s Public Enemies, but he is more a teddy bear with a heart of gold. Who else could wear plaid to a red carpet premiere?  I had the good fortune to meet with the actor at the LA Film Festival premiere of Public Enemies and to later interview him one on one from the comfort of our own homes.

Public Enemies was not your first venture with Michael Mann.  You also had roles in Ali and Collateral and his television series, Robbery Homicide Division.   Is there something special about Michael Mann that makes you want to work with him time and again?

He’s intense.  He knows how to push the right buttons.  He’s a fantastic coach, and he’s smart as hell. He’s intuitive.  He’s conscientious, and he knows how to push you.  Some people don’t like being pushed, but I love it – if I’m being pushed in the right spirit, if you know what I mean.  Don’t beat me up, but allow me to take chances and make my own choices.  Michael does that.  If I had two lines, if I had one line, if I had no lines in a Michael Mann film, I’m taking it.  You know why?  Because every Michael Mann character is about something.

What research did you do for the role?

I did my own research on Herbert, on the period, and how he got to Crown Point (prison).  One day, I asked Michael (Mann) if he had any research for me, and he gave me a catalog, a big fat catalog of stuff on Herbert Youngblood.   That’s the level he takes it to.

How did you fall into the role of Herbert Youngblood?

This is funny.  I’m at a stop light in Beverly Hills and who pulls up next to me?  And Michael had recommended me for a role in a show maybe four months prior to that.  Michael was looking out for me, but I didn’t get the role because I was too old for it.  So the next day, I tell Maria (agent) to send Michael Mann a package – new head shots, updated resume, the whole nine yards.  About two months later, Maria says that Michael Mann is going to hire you without auditioning you.  It was fantastic.

Michael Mann used the original penitentiary where Dillinger made his escape with Youngblood. Tell us what it was like to shoot in Crown Point, Indiana.

We shot from the first floor in the jail in Crown Point.  I think whenever there is an element of realism, the clothes a person wore, an item in the actual possession of the character that you’re playing, it becomes easier to osmose .  The clothes, the atmosphere of the building, a chair, a cell, or a bar of soap.  It helps you to really sense and feel what the actual prisoners may have experienced.

How realistic was it to use a soap gun to escape from prison?

The legend is that Herbert Youngblood, my character, was actually the one who tooled the gun.  In my research, I found that was what Herbert did and possibly out of a bar of soap or a piece of wood and gave it to Johnny Depp – Dillinger.

What was it like to shoot the scene with Dillinger singing in the getaway car?

I found some humor in it.  How could you not?  You’re surrounded by the National Guard, and they’re looking for you.  They know what John looks like, and we drive right by them.  For me, it was full of apprehension and for John as well.

Can you tell us what happens to Youngblood after he made his escape with Dillinger?

It’s about how I relate to John Dillinger as John Dillinger, how he related to me as a black man in 1934 in jail for murder.  Herbert was in jail about four or five months prior to John Dillinger’s arrival to Crown Point.  He had taken an Italian man over a card game in Gary, Indiana.  He was born in Gary, he was a hustler, a street hustler, but he wasn’t a bad dude.  He just had a lapse of judgment.  He escapes with Dillinger in July of 1934 and goes on the lam for two weeks.  He gets recognized by a young boy.  It turns out that the young boy’s father was a deputy sheriff.  The kid runs to his dad at home and tells him there’s a guy that looks like the guy on the wanted poster.  His dad runs to the store.  Herbert has a gun on him, and he shoots him.  A couple of other officers had responded and they shoot Herbert dead.

Were you pleased with the final cut of the film?

I’m not good at watching myself, because I’m seeing what I could have done to make it more alive.  That’s the nature of acting.  You’re always criticizing yourself, seeing what I should have done this differently.  If Michael Mann says cut and print and puts you up on the screen, then I’m doing something right.  I can’t beat myself up that much.

You and John Michael Bolger were absolutely charming at the LA Film Festival premiere of Public Enemies.  When I later interviewed John, he only had the best things to say about you.  He said you were like brothers.  Seeing as you did not know each other before Public Enemies, how did you two become such fast friends when you shot no scenes together?

I got to Chicago which was where we were based.  I walked into the hotel lobby (laughs), and there was this guy dropping one liners and doing this whole comedy routine.  And he asked me actually, I was staring at him, he said, “Are you Michael Bentt?” And I said, “Yeah, I am.”  And he’s a big fight fan, and he knew me from my days as a fighter many moons ago.  And we started talking about fights and movies, and we started talking trivia.  We just hooked like brothers, man.  I talk to John at least once a week.  He’s a sweet man and a fantastic actor.

Public Enemies aside, we cannot forget your boxing prowess as a former Heavyweight Champion.  Playing Sonny Liston in Ali must have been second nature.  What was it like to be the chief sparring partner and assistant trainer to Will Smith?

It was my temperament and my knowledge of boxing.  Being Will Smith’s chief sparring partner was a big responsibility.  As a sparring partner, I have to hit him, and I have to let him compete.  But there’s a fine line.  I can’t hit him to a point where I think it’s beyond.  It’s Will Smith.  It’s very professional, it’s very complicated, and they hired me for it.  It changed my life essentially.

What was it like playing with Johnny Depp and Will Smith in these films?

These men I’ve had the chance to work with, Johnny Depp, Will Smith, they are stars, and they are down to earth, so approachable, so giving in acting, so smart, and funny as hell.  But when you think about it, why shouldn’t they be?  They’re human beings, and my time with Johnny Depp and Will Smith was golden.  I met Marion Cotillard, and she was wonderful, wonderful.  She’s the only person I’ve met that I can honestly say I was in awe of.  I watched La Vie en Rose a week or too before I went to Chicago and (whistles).  Oh, my God.  That’s the level that I aspire to.  The level that she went to, that she pushed herself to, it’s breathtaking and inspiring at the same time.

Michael Bentt and I played a bit of phone tag to capture this interview, but it was well worth the effort.  His personal charm and effervescence can soothe the savage beast.  He is currently working on a role for FX’s Sons of Anarchy, so keep your fingers on the remote.  It’s sure to be a standout performance.

Special thanks to Karen from JohnnyDeppReads.com for making this interview possible.

Editorial: Dr. Tanya Feke is a family physician and guest columnist for the Town Times. She has been press credentialed to the LA Film Festival and continues to pursue a love of film. Her reviews are rated on a five stethoscope scale. Also stay tuned to social media with Facebook and Twitter.